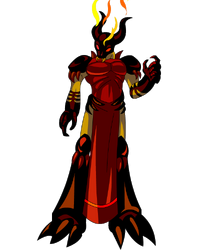 To the Aid of Ashenvale

During peacetime after Akriloth's death, the small village of Ashenvale near Battleon is attacked by a small force of fire monsters. However, it is saved before it completely crumbles. Rumors of the leader of the forces surfaces, and his name is Drakonnan. Akriloth killed his family and his brother, driving him mad. Drakonnan collected the shards of the Prime Fire Orb, and now seeks a skewed form of revenge against mankind.

Slaying of the Fire Dragon

Another army of fire monsters is sent to attack another neighbouring village, Moonra. A great fire dragon is killed along the way, and Drakonnan apparently becomes frightened and retreats. In order to prevent him from fighting back, the forces of Battleon searched for the Flame Guardian Armor to resist his attacks better. The Flame Guardian armor, forged by one of Yulgar's ancestors, absorbs fire as it is hit, becoming stronger as it is attacked.

While they are gone though, Drakonnan, who was merely amassing his forces into a larger group, launches another attack on the eastern hills, lead by a small force of Plasma Dragons, Drakonnan forced to the surface, causing a massive fissure with static energy flowing from it to appear in the eastern hills.

The Assault on Battleon

The plasma dragon is killed, but as the player returns to Battleon, it is revealed to be in flames. Drakonnan launched an attack on Battleon as well, with the Plasma Dragons merely being a decoy. It is too late to save the town, and Demento, Galanoth's brother is killed during this battle by Varax. The forces fought back, and Varax is killed. Drakonnan becomes angry, and takes Galanoth and many of his allies as hostages, then retreats back to his volcanic fortress in Smoke Mountain, Akriloth's old home.

Yulgar tells the player of the Ice Katana, a magic weapon which controls powers of ice and is able to even freeze monsters solid. Believing it can be forged from ice crystals in the far north near IceFall, the player journeys north to gather the crystals. The quest to gather the crystals was the first walk-around quest in the game. Eventually the katana is forged, and the final attack is launched on Drakonnan's volcanic fortress.

Going on the Offensive!

The final battle begins, and the army of Battleon begins to attack Drakonnan's forces around Smoke Mountain. 2 million fire monsters were defending him, and Artix von Krieger had been kidnapped by Drakonnan and transformed into a powerful evil Shadowfire Knight. The army of Battleon journeys into the surrounding caves and warzones around the volcanic fortress, flushing out and killing off any of Drakonnan's minions.

Eventually, Evil Artix confronts the player confronts outside Drakonnan's volcanic fortress, and attempts to kill the player. He is defeated, and reverts to normal with some injuries.

Zorbak, an EBIL Moglin necromancer who wishes to help the player, joins you as a guest and accompanies you into the fortress in the second walk-around quest. The player frees Galanoth, Smbdoll, and others from their holding cells as they go. Twig the moglin is met halfway through the dungeon provide healing for the player, and would return with the player to Battleon's ruins after the war ended. After de-activating the mega fire orbs powering the fortress, the treasury is unlocked, and the Ice Katana is retrieved.

Entering Drakonnan's throne room, the player defeats Drakonnan using the Ice Katana, and Drakonnan falls into a pit of Lava along with his throne. The victory is short lived, however, as the reason Zorbak came with the player was because Drakonnan had his chair, and the EBIL little moglin attempts to bargain with the dying Drakonnan to get it back. Unfortunately, he bargains with a mega fire orb, and Drakonnan eats it in a last ditch effort to survive. He transforms into Ultra Drakonnan, a giant flaming demonic version of himself, and challenges the player one last time. Zorbak and the player kill him, and Zorbak opts to take his helmet as a chair instead. Players could buy Great Fire War T-shirts online as a souvenir to celebrate the victory.

Some time after the end of the Great Fire War, a rogue group of Drakel emerging from a Drakel Domed City in GreenGuard Forest kidnap Valencia, but their motives are unknown. Fighting through the Drakel forces and reaching Valencia, the player is stopped by Commander Kragg, a cybernetic Drakel general. Upon defeat, Valencia is freed, and Kragg retreats, but his defeat seems to begin splitting more Drakel into even more factions.