“Of course all of Lore is in danger! I will now use this great power to conquer all of Lore's heroes, obliterate them, and then take over!”

Calladus was once a Seeker, he only battled Guardians. But then he gained even greater power through dark magic, and seek to destroy all of Lore's great heroes. He also has the ability to control Darkness Dragons.

In "Zorbak's Trickery" he was able to defeat both Zhilo and Galanoth and he nearly killed them but the player comes just in time and defeats him. He joined the Sinister 7 during the "The Devourer Saga", where he was given the Prime Earth Orb but he and the rest of the Sinister 7 was defeated by the Guardians of Lore. Much Later he was exploring Greenguard Forest where he found a cave in which he sensed great power coming from inside. The power was coming from a strange stone slab in the center of the cavern. Calladus destroyed the slab hoping that he would be able to harness the power within the slab so he could conquer all of Lore's heroes, obliterate them, and then take over. But the stone slab was actually Nemesis magical prison. Calladus tried to control Nemesis but instead Nemesis killed Calladus. 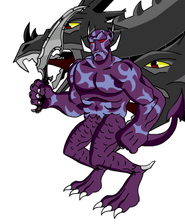 Old art
Add a photo to this gallery
Retrieved from "https://adventurequest.fandom.com/wiki/Calladus_the_Dragon_Master?oldid=41139"
Community content is available under CC-BY-SA unless otherwise noted.