“THANK YOU FOR COMING TO MY PARTY. NOW YOU DIE.”
—Drakath Slugwrath, Sinister 7 War

Drakath Slugwrath is a Human prince from an unnamed kingdom who became a Darkness Dragon.

“You are nothing without your fury and revenge, Drakath. [...] The Cold fills you. Can you feel it twisting your soul...?"
"YES... AND I LIKE IT.”
—Shroudbrood and Drakath, Sinister 7 War

Initially appearing as dragon, Drakath's skin and scales are pitch black, and his eyes glowing green.

As a human, he is a young man with spiky black hair, tanned skin and green eyes, with marked eyebags under them.

Little is known about Drakath's life prior to the events of AdventureQuest, only that he is related in some way to Falconreach, that he was once a prince and that he was born a human. As a member of royal line of Slugwrath, he is a descendant to Drageth Slugwrath.

At one point, he became a Darkness-elemental dragon through unknown means. He also learned of the Cold and began to gain followers in dwellers of the dark with it, namely in the shadow mines of Stone Deep, in Vandar, where he hid for a long time.[1] From the shadows, he worked to take control of workers in the deepest levels,[2] and more importantly, of the Shadow Lord's communicant, Myr, who subconsciously resisted his spell.[3][2] In accordance to the Brilhado's plans, he was used as a pawn[4] to provoke a war in Battleonia between the elements of Fire and Darkness as he gained possession of the Fire Orb.

Drakath was hunted for it by the Chosen, unaware of Akriloth's manipulation. As the human armies turn the tide of the ensuing battle, Myr and his fellow clerics proceeded to dispel the effects of the Cold on the affected miner and realized that the Devourer still sought him.[2] Likewise, followers secretly serving the Brilhado withdrew from his arm towards the end, allowing him to fall.[5] Drakath is finally defeated, and dies before he can disclose Akriloth's lies. (The Dragon War: Part 2)

As the Chosen is on his way to give the Fire Orb to Akriloth, Diviara Celegra under the disguise of the Mysterious Necromancer, raises Drakath from the dead (The Dragon War: Part 2), alongside with a handful of other Brilhado Necromancers.[6] Now a Dracolich with regenerative capabilities,[7] Drakath joined the Brilhado's undead army and was made to steal the Frozen Claymore to wreak havoc within Battleon's army during their war against Akriloth and, though he fell once again and the Ice weapon was recovered, he rose to continue roaming the lands. (The Return of Drakath)

As the Chosen gathers all the Prime Elemental Orbs along with the Creation Orb so that they may be guarded in the Temple of Hope, Drakath is resurrected once his remains are gathered—due to the blood of the Chosen's defeated enemies—and his life is restored by the ninth orb's recreation. To have his revenge against his killer and the Brilhado Necromancers for using him, Drakath seized the opportunity to steal the Orbs and set the temple ablaze as soon as king Tralin left the Temple to attend a royal meeting. Soon, he gathered the Zardmaster, Drakonnas, Nepto, Calladus, Jack Frost, Drakonnan and Sila in a fortress in Deren and orchestrated a war against Unity and the Network. Though Drakath is defeated and reduced to undeath once again, Shroudbrood appears before him and says that their spells have stayed his passage from the world of the living. Intending to use him further, he casts the Cold on him once again so as to repress him. (Sinister 7 War)

At some point, Erebus conversed with him with an unknown purpose in mind. The shadow, after his partnership with Shroudbrood came to an end, giving him an aid to entirely break free from the Cold's thrall,[8] informing him that his chance would come during Frostval.

Once Shroudbrood falls, dead by his hand, Drakath is used again by Frigidere. As he became the nexus of his army, his defeat means the collapse of the lich's entire army. Due to being created through Cold-based necromancy, Zorbak and the Chosen need an expert to stop him, and it is then that Diviara Celegra appears so as to liberate the former prince from the control of necromancers and undo the magic that brought him to his by-then current state, reverting his anima into a full living state. The Brilhado tells Drakath to let go of his hatred, just as he becomes human again. (Frostval 2012: Gift Delivery!)

Diviara brings Drakath to Deren's castle, where he has been spending considerable time with Tralin. Along with Myr and the Drakel king, he convinced Diviara to go see his son in Battleonia, while the Paladins and the Necromancers waged war as led by Artix von Krieger and Kaley Obsidia, respectively.[9] In presence of the king and the communicant, he also witnessed the elemental-collapsing effects of the war and the damage to Lore's ley lines[10] (The Past Unravelled V).

Sometime later, Drakath is prompted by Erebus to talk sense into Grimveil, whose experiments to regain his necromancy may have potentially catastrophic results, and the former prince accepts. As per his promise to the king and the Chosen, he alerts the latter of Erebus' return to Lore. (The Past Unravelled III) As he leaves for Deren, the Chosen recognizes that he is telling the truth, though knows not for whose advantage. (Transmorphers!)

He appears before Grimveil, where he engages in a conversation with the young Brilhado, and warns him about his course of action, only after Grimveil realizes in retrospect that he was not very fond of his father, Shroudbrood. However, he cannot promise not to kill him once Drakath finishes talking about all that he knows about Erebus and "Rutan", also known as ENTROPY. (The Past Unravelled V)

Drakath is fought as a monster in five different forms: in his nor-Rare original look, encountered in The Dragon War: Part 2; in his Dracolich form, from The Return of Drakath; his resurrected form from The Sinister 7 War; in his updated Undead version; in his 10th Anniversary form, which reuses his original form; and in his form as Frigidere's Nexus, from Frostval 2012: Gift Delivery!. In all of them, Drakath is a Darkness-elemental Dragon monster.

Drakath is a powerful Darkness dragon... As a Dracolich, he was raised as a regenerative undead, allowing him to fallen numerous times but eventually return.[7]

According to Nel, his use of the Cold on several mine workers took "considerable effort" to dispel.[1] He was, however, unable to break free of the Cold by himself, until Erebus gave him a way.[8]

Although he is human again, he is still able to detect oddities in Darkness, due to being sensitive to it for a long time in the past.[10] 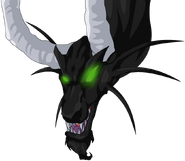 During the Dragon War. 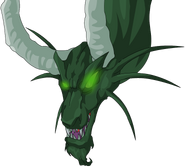 In his Undead form.
Add a photo to this gallery

Retrieved from "https://adventurequest.fandom.com/wiki/Drakath_Slugwrath/NPC?oldid=39771"
Community content is available under CC-BY-SA unless otherwise noted.