“Your mind cannot begin to wrap itself around the magicks involved. Equal parts transcendental correspondence and colocation with a side of deific metastate.”
—Falerin Ardendor, The Restoration

His disciple is Galrick, son of Glenn, and he is friends with Eldron the Good. He is also known to be a writer and transcriptor. Some of his work includes the Codex of Deeper Mysteries, Interplanar Gastronome and The Answer is Mu.

“It does not help that I tend to be a bit sesquipedalian at times."
"At times?! Falerin, were they to look up the word in the Encyclopedia Lorica, your face would surely be given as the chief example.”
—Falerin and Lorithia, Tangled Web of Fate

Falerin is tall, possesses platinum gray hair, and is elf-like. He is always impecably dressed (in contrast to Eldron). He looks very similar to the Traveller.[1]

Wise and clever, Falerin... He is known to be bit unreliable on fights, as he generally teleports away when swords are drawn; however, this is due to the fact that he is forbidden from actively interfering on Lorian affairs.

Born in Caelestia approximately 30,000 years before the events of AdventureQuest, Falerin was a human who had always preferred to be an elf.

He started out as an apprentice to Dralen Ath, mage priest to the Spider Goddess Lolth, who had a portfolio both in Caelestia and her original world, Toril. Dralen planned on taking Lolth's position by combining his power with that of some of the gods of Toril to kill the goddess. However, Falerin betrayed Dralen's plan to Lolth, who then gave Falerin his position. At this point he is believed to have become a full Grey Elf.

Eventually, he ascended to the rank of Demipower, and then worked with other Caelestian powers to oust Lolth. Falerin was then given the position of God of Evil, as an Extra Greater Power in the Pantheon, but also had became a member of the Farpoint.

At some point, he was affected by Tholeon Webb's meddling with Caelestian history which resulted in Eldron's removal and in Falerin never leaving his old portfolio to become the God of Evil. However, heroes from the post-apocalyptic future defeated Webb, undoing the changes, and thus allowing Falerin to become the God of Evil as it had been in the original timeline.

Opposed to the Devourer

For many years, he continued to carry out his duties as Caelestian god, until news of the Uncreator reached him. As a result of Webb's actions, Falerin became concerned with the possibility of The'Galin becoming a threat to his homeworld and sought to stop his advance outside of Lore. (The Temple of Hope) To do so, he became the Loremaster of Lore with Lorithia's permission.

Falerin was disincorporated during a confrontation with Seth Cay Dhows, splitting his body into various pieces. These pieces of Falerin were mostly gathered during the Mostly Harmful War Special Mission but two pieces still remained, however-- the Loremaster whom we defended and Ardendor, a far more playful and childlike version in control of Falerin's body and under the direction of Epsilon. With the Chosen's help, however, Falerin successfully gathered back his last piece so he could be incorporated, and also managed to take control of his analogue "E".

After Dhows' true form was revealed, Falerin was conferred the title of "Lorian Demipower of Lore: Discovery, Knowledge and Secrets".

He is one the representatives of the Lorian Pantheon during the godwar against Etherseid, but soon after the NightMare was defeated, he departed, claiming it was tiring to be away from his homes for so long. (Absol-ution IV)

He knows some of Beleqwaya's Archmagic, and has been said to be capable of doing much that an ArchMage does and possibly even educate as one. The fact that he is forbidden to interfer with Lorian affairs massivley limits the power he could use. He is known to teleport with ease...

Falerin has many Avatars that he uses for scouting or doing his work. Some of his avatars seen are The Traveller, The Sojourner, Above, Arden and Lanfiré Dupré. Unlike the Lorian Pantheon, Falerin prefers the use of physical manifestation, even though it means sacrificing his temporal immunity. 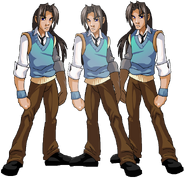 Fal and Copies - The ones on the left and right are rather rude, aren't they?

Rude Falerin - Looks like one of his Avatars, but isn't.