“But the Dragonslayers shall not -- now or ever -- stop hunting your kind who are evil, who prey upon the innocent, or destroy that which is not theirs.”
—Galanoth

Galanoth is the top Dragonslayer in LORE. He is always looking for travelers such as yourself to join his honorable order. His Also, he knows the Axe Master Zhilo. They appear to be rivals.

Galanoth was raised like a normal child until the age of 4, when a hoard of fire-breathing dragons lead by Akriloth, scorched his entire village. His family was killed, but not until after his Mother, an enchantress, cast a spell upon a ragged cloth which made it impervious to flame. With this she surrounded his small body as well as she could but he was still burned over some of his body. He still wears the flame-proof blanket to this day as his cape.

When he became an adult he dedicated his life to slaying dragons and their kin. He then Founded the Order of Dragonslayers. He had a blood brother named Demento a legendary guardian who fought in many wars, until his death at the hands of Drakonnan's Army during the Great Fire War. His apprentice is Zero-Hex who do not share Galanoth hate for all Dragonkind. Galanoth was at one point possessed by the Dragon King but was later saved.

Galanoth also despises the dracomancers because he believes they protect all kinds of dragons, good and evil. Despite Galanoth's hatred for the Dracomancers (especially Lord Cyrus), he frequently has made temporary alliances with them in order to defeat massive dragon fleets. But Recently, Galanoth seems to have lost some of his hatred for Vaitais after Cyrus's sister, Sheila, saved him from falling to his death after being blasted off a cliff by Xerxes, an act she said was a repayment of the debt she owed him for his helping rescue her from Bradakhan.

After this point in time, Galanoth was willing to make more permanent allliances and listen to all sides of the story. He helped an intelligent dragon named Draschemus defeat the evil Jaraka-Nuth in order to begin an era of civilized dragons (though this may have been out of the desire to defeat Jaraka-Nuth again). He also helps Cyrus and the player defeat the demipower War when he attempts to destroy Lore. After War is defeated, Galanoth and Cyrus begin discussing a permanent alliance and opening Medrovia to all. 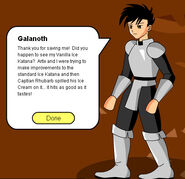