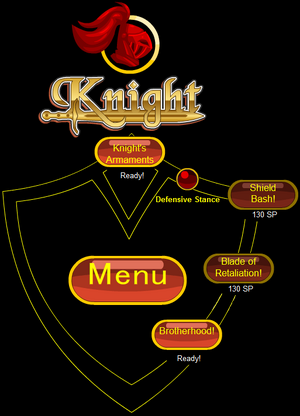 Calls forth a temporary shield and a weapon for you to wield in battle! Your sword and shield will grow stronger as you gain levels in Knight, but they will vanish if you change armors! Rennd's equipment is especially good at demon-slaying! Click again to unsummon.

Every knight must know how to defend themselves. Your foes will find it harder to harm you while defending, though your attacks won't be as strong.

Changes your Armor Lean to:

With your extensive knowledge of sword and shield combat, you can use your shield as a weapon! Lower your shield and deliver a powerful bash that deals damage based on how strong your shield is, with a good chance to Daze your enemy!

Chance to Daze your opponent*, subject to a save**. Monsters of the same element as your shield are immune to the Daze effect***.

A knight is trained to defend the helpless, and retaliate against evil. Spend a turn to weather your opponent's blows and tire him out, the strike with a vicious counterattack!

Your greatest strength is the company you keep. Call forth another knight to aid you in battle!

Summons a Knight of Rennd to fight by your side. Cast again to dismiss. This does not cost a turn.