“Me neither-- and I have seen a LOT of strange stuff, with and without the aid of brew.”
—Yulgar, Battle for the Weapons of Salvation

Yulgar is a skilled blacksmith, shopkeeper and the owner of the most important inn in Battleon. A middle-aged man believed to be a warrior in his younger days, Yulgar is renowned for his weapon shop, where many gather to get their hands on the newest equipment.

Due to this, he has a notorious problem for running out of the best items, the so-called Rares.

When the Chosen first encounters Yulgar, they are politely welcomed into his Inn. Yulgar is a hardworking citizen in Battleon and is willing to help anyone in need of it. He even offers to assist the Chosen in quests such as in The Protector, Azma Lake and many others. He is known to be a humble blacksmith along with being "exceedingly hairy".

Little is known about Yulgar's early life. He is the great-grandson of Imdar and a descendant of Kuldar and Bord (Huntress vs. Yulgar), and a cousin to Adder (Huntress, the Hunted!). Like many of his ancestors, he became a blacksmith and has made "an awful lot of weapons over the years" (Huntress vs. Yulgar). Yulgar, at some point, became the owner of the iconic inn, which came to be known by his name. He also took Hans Olo as his apprentice (A Day at the Inn).

In the Devourer's most recent return to Lore, The Huntress abducts him after confirming his ancestry. (A Day at the Inn) Believing he knows about the location of the Weapons of Salvation, Celestra brings him to the basement of the Guardian Tower where the Book of Salvation is located. After being forced to find and open the book, Yulgar is left to take the blame for her actions—stealing the book and knocking out the Guardian, Maximus. (Huntress vs. Yulgar, Book of Salvation) He is even imprisoned for a short time until Maximus wakes up and confirms his story about the Huntress. (Jail Time)

Yulgar is also present when the Huntress is brought to the Guardian Tower and questioned about her past and allegiance, humorously insisting she should be put in jail. (Trouble From Beyond) After Walic informs everyone (including Yulgar) that Yulgar and Adder are related, the blacksmith meets his cousin in Isle d'Oriens, where they are told of the Weapons' actual location—hidden deep underground beneath the crater from where the Isle d'Oriens rose into the sky long ago. In the battle that ensues, Epheel manages to reach the chamber where the weapons are, and the Huntress and Yulgar pursue him. They are, however, overpowered by the once-human creature, who is then defeated by the Chosen. (Battle for the Salvation Weapons!)

Afterwards, and for the duration of the war against the Devourer's forces, Yulgar left the Inn to fight the Network. In the meantime, Hans took his place at the Inn while he was gone. He also assists the Chosen, along with Celestra and Aquella, in investigating sightings of creatures most likely related to the Network, such the Predecessors who had been sighted by villagers near Azma Lake and, later, the Protean. (Azma Lake, The Protector)

Nowadays, he just continues doing his job as an innkeeper, blacksmith and shopkeeper.

Yulgar serves as an Earth Guest available in the following quests: Battle for the Weapons of Salvation, Azma Lake, The Protector, Attack on Granemor!, The Fall of Augerthorne, The Rise of Omega; Quest for the Terror Set, and Face of Silence!. As such, he is an Earth Quest with two attacks--both Ranged and Melee.

As a blacksmith, he is able to create weapons. 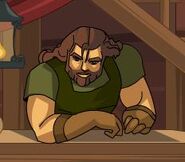 Oldest art.
Add a photo to this gallery

Retrieved from "https://adventurequest.fandom.com/wiki/Yulgar?oldid=41763"
Community content is available under CC-BY-SA unless otherwise noted.