“Shop for new armor and weapons or take a quest!”
—The Inn's description

Yulgar's Inn is a hostelry located in the town of Battleon. Named after its owner, the inn is widely regarded as one of the iconic places of the town, as it is where travellers rest and adventurers buy weapons.

In charge of its care are Yulgar and his apprentice, Hans Olo. Other characters usually found in here include Robina Hood, Aquella, Uldor, Blackhawke, Finch and Twig the Moglin.

Players can buy equipment from its many shops, and Yulgar is also able exchange adventurer no-drop equipment for twenty Z-tokens. Several quests and letters are available in there as well.

Its descriptive title is "You can go inn... but you cannot go out!"

The inn is a two-floor building, made of wood and with a dark blue tile roof. Above the main entrance, a sign that says "inn" is hanging. (...)

Yulgar and Hans receive outsiders from the reception desk, just in front of the stairs that lead to the second floor. Robina Hood can be found in the same room, where she points adventurers to the direction of a few dungeon quests, the Rogue Class, the Truphma Saga, and sells items, just as he does in her own shop.

Next to the reception is the lounge area, where the fireplace is located. Guests may enjoy themselves in there, including Uldor and Aquella. The blind sage has connections in the Drakel Black Market, while Aquella may give quests to adventurers. The lounge is connected to other two rooms, in one of which there is a table with a letter from Beleqwaya Melamin informing the player's character to go to DragonClaw Island and a potion with a label that reads "Drink me", which triggers the Into the Darkness quest.

On the second floor of the inn, the restroom and Room 42 are located. The restroom is infested by the Shower Monster, while the other room contains the answers to the universe. This door, however, is locked, bolted, and ducted taped shut. Between the doors, the stairs to the attic are located. Blackhawke, trainer of the Fighter Class, can be found in the same corridor.

In the attic, where boxes are stored, Bishop Finch can be found. He offers the quest Monster Hunt.

Somewhere the storeroom that contains Paladin equipment is found in the inn.

Several shops are found in the inn, including: Yulgar's Beginner, Intermediate and Advanced Shops, the Paladin Storeroom, Robina's Shop, and the Drakel Black Market through Uldor. 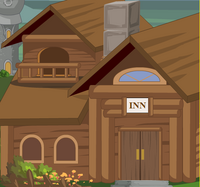 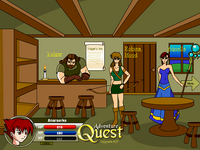 Third room.
Add a photo to this gallery

Retrieved from "https://adventurequest.fandom.com/wiki/Yulgar%27s_Inn?oldid=35488"
Community content is available under CC-BY-SA unless otherwise noted.